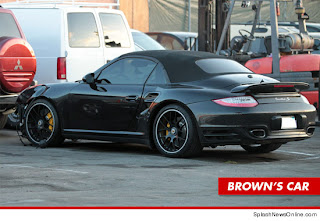 LOS ANGELES (Reuters) - Embattled R&B singer Chris Brown crashed his car into a wall in upscale Beverly Hills on Saturday, and later told police officers he was trying to elude aggressive paparazzi, police said.
The crash came on the eve of the Grammy Awards, almost exactly four years after Brown assaulted his girlfriend, singer Rihanna, the night before the awards show in 2009.
In the latest incident, Brown told Beverly Hills police that photographers were chasing him right up until the crash, said police Sergeant Kurt Haefs.
The singer was not cited or arrested at the scene, Haefs said. He added the damaged vehicle may have been towed away.
Media reports indicated Brown was driving a black Porsche.
A representative for Brown, who was not injured in the accident, did not immediately return calls on Saturday evening.
Brown pleaded guilty in 2009 to beating and punching Rihanna and he faces ongoing legal troubles stemming from the case.
A Los Angeles judge on Wednesday ordered a new report on the community service Brown was due to perform as a result of the conviction, after prosecutors accused the singer of cutting corners on the work.

Prosecutors have cited occasions when they said Brown was not at the recorded location of his community service and instead was performing or traveling, once on a private jet bound for Cancun, Mexico.
Rihanna, who has admitted that she has resumed dating Brown, accompanied him to his court hearing on Wednesday.
Brown's attorney, Mark Geragos, has denied the latest allegations about the singer's community service and accused prosecutors of persecuting his client.
This year, Brown's "Fortune" is nominated for best urban contemporary album at the Grammy Awards.
(Editing by Alex Dobuzinskis and Sandra Maler)