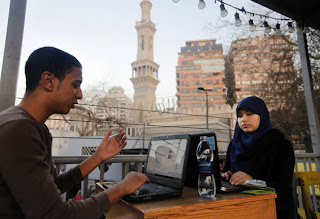 By AYA BATRAWY
CAIRO (AP) — A Cairo court on Saturday ordered the government to block access to the video-sharing website YouTube for 30 days for carrying an anti-Islam film that caused deadly riots across the world.

Judge Hassouna Tawfiq ordered YouTube blocked for carrying the film, which he described as "offensive to Islam and the Prophet (Muhammad)." He made the ruling in the Egyptian capital where the first protests against the film erupted last September before spreading to more than 20 countries, killing more than 50 people.

The ruling, however, can be appealed and, based on precedent, might not be enforced.
The 14-minute trailer for the movie "Innocence of Muslims" portrays the Muslim Prophet Muhammad, a central figure to Islam, as a religious fraud, womanizer and pedophile. It was produced in the United States by an Egyptian-born Christian who's now a U.S. citizen.

Egypt's new constitution includes a ban on insulting "religious messengers and prophets." Broadly worded blasphemy laws were also in effect under former President Hosni Mubarak prior to his ouster in a popular revolt two years ago.

Similar orders to censor pornographic websites deemed offensive have not been enforced in Egypt because of high costs associated with technical applications. Blocking YouTube might be easier to enforce, though it also can be circumvented by active Internet users.

Rights activists say Egypt's ministry of communications and information technology has appeared unwilling to enforce such bans. The Cabinet spokesman could not be immediately reached for comment.

Human rights lawyer Gamal Eid said the decision to ban YouTube stems in large part from a lack of knowledge among judges about how the Internet works. Activists say this has led to a lack of courtroom discussion on technical aspects of digital technology, leaving cases based solely on threats to national security and defamation of religion.

"This verdict shows that judges' understanding of technology is weak," Eid said. "The judges do not realize that one wrong post on a website does not mean you have to block the entire website."
Eid, who is executive director at The Arabic Network for Human Right Information, said the government should file an appeal and make it clear to judges that, at most, only specific pages on websites should be blocked.

His group released a statement saying that the decision to block YouTube is counterproductive, citing thousands of videos that seek to promote a better understanding of Islam and the Prophet Muhammad on the website.

Requests for comment from YouTube's parent company, Google, were not immediately returned.
Google declined requests to remove the video from the website last year, but restricted access to it in certain countries, including Egypt, Libya and Indonesia, because it said the video broke laws in those countries. At the height of the protests in September, YouTube was ordered blocked in several countries, including Iran, Pakistan and Afghanistan. Saudi Arabia's King Abdullah issued an order blocking all websites with access to the anti-Islam film in the conservative kingdom.

Lawyer Mohammed Hamid Salim, who filed the case against the Egyptian government, alleged the film constitutes a threat to Egypt's security, adding that YouTube refused to remove the film despite its offensive content. Protesters in Cairo scaled the U.S. Embassy's walls and brought down the U.S. flag in the first demonstration against the film last year.

Two other cases filed against the government and Google are pending in Egyptian courts. One lawsuit calls for a complete ban on Google's search engine and demands the company pay a $2 billion fine.
Last year, an Egyptian court convicted in absentia seven Egyptian Coptic Christians and a Florida-based American pastor, who allegedly promoted the film, sentencing them to death on charges linked to the anti-Islam film. The case was seen as largely symbolic because the defendants were outside Egypt and unlikely to ever face the sentence.

The cases raise concern by some seculars and liberals that Islamist lawyers, emboldened by the Muslim Brotherhood and other Islamist groups' rise to power, are seeking to curb freedom of speech. However, the most widespread curb occurred under Mubarak when his government blocked all access to the Internet for several days during the 18-day uprising that ousted him from power in an attempt to disrupt communications among activists.

Protests have continued to roil Egypt in the two years since Mubarak was toppled, with the latest bout of violence directed against President Mohammed Morsi's rule. Friday's protests were ignited partly by the apparent torture-death this week of activist Mohammed el-Gindy, whose body showed marks of electrical shocks on his tongue, wire marks around his neck, smashed ribs and a broken skull, according to an initial medical examination and one of his colleagues.